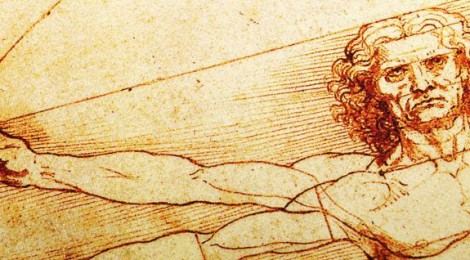 Our Body of Politics

“Our ability to reach unity in diversity will be the beauty and the test of our civilisation.” ― Mahatma Gandhi

It may still be a bit too early on a Sunday morning to get ourselves too excited, but if you take a look at the front of today’s order of service this is probably the only naked body we’ll see in church today. In case you’ve not met this particular body before he’s known as Vitruvian man – drawn by Leonardo da Vinci from an idea by Roman architect Vitruvius. It’s about proportion of the human form and the idea that perfect proportions are pleasing to the human eye, can be found in the natural world and can be replicated in art and architecture.

If I was to sum up my message today it would be that we Unitarians have some vital tasks – to reclaim imperfection, to celebrate diversity, and to raise our own awareness of other people’s life experiences. Yes perfect proportions are pleasing to the human eye but this is not a real human being – it is an image – and we are capable of going beyond external images to the wholeness that makes a human being, a real living being.

But let’s start with vegetables. Parsnips to be precise. We have celebrity chef and restauranteur Hugh Fearnley Whittingstall to thank for his campaign to highlight the amount of food wasted here in Britain. He’s been highlighting the plight of farmers who have any vegetables that are different from the norm rejected by supermarkets. They are usually forced to plough them back into the ground. One Norfolk farmer recently had to do just that with 40% of their parsnip crop because they were not a perfect shape.

What Fearnley Whittingstall is trying to do could be described as consciousness raising. His campaign aims to make us all more aware of what is happening behind the scenes, he’s bringing an issue that was hidden out into the open to be discussed by ordinary people. These conversations and his campaign may bring about change. The term consciousness raising first emerged in the 1960s as part of the feminist movement. Women gathered together in groups to talk about their experiences of gender inequalities. Such conversations filtered out into wider society and helped to bring about change. The Equal Pay Act of 1970 is a good example. I still remember being paid less than my boyfriend when we both did the same job in a pub. I can imagine some of you here today will have similar memories. Feminist consciousness raising was borrowed as an idea from the Civil Rights Movement where it was called ‘telling it like it is’ – an encouragement for people to tell their life stories so that they themselves can better understand their own experiences and can put their individual experiences into a wider context. Hence the famous statement that ‘the personal is political’. Every life is lived within a wider social and cultural context and is affected and even shaped by the world in which we live.

In the time of recorded history we humans have made steps forward in our awareness haven’t we? No world government now allows slavery – though there is much work still to be done on hidden slavery – indentured labour and other practices which limit the freedom of individuals. The idea that one human being could own another human being was once common and it no longer is. If any of you are Biblical scholars you’ll know that there are various passages in the Hebrew and Christian scriptures that tell people how to treat their slaves. They were written thousands of years ago and are no longer appropriate in the 21st century. That’s why most religious liberals regard the Bible as the work of humanity rather than God. That’s why we despair at times when the word of the Bible on issues such as same sex relationships is used to oppress people and to try and stop them from loving the people they love.

In many of our lifetimes we have witnessed countries like the United States and South Africa introduce equality laws to stop the legally sanctioned unequal treatment of people because of race. Here in Britain we now have equal marriage legislation – with some of the campaigning for that issue carried by our Unitarian movement. Here in the Royal Borough of Kensington and Chelsea there are 80 churches and we Kensington Unitarians are the only one registered to conduct same sex marriage ceremonies. I’m proud that we’re putting faith into action in this way. We support the inherent worth and dignity of each person. In Ghandi’s words we find ‘unity in diversity’.

I wonder what forms of inequality each of you has experienced in your lifetime. We all have stories to tell, don’t we?

And there will always be more consciousness raising to be done. November is designated as Transgender Awareness Month. I was saddened to hear that a transgender woman Vicky Thompson had taken her own life this week after being sent to a male prison in Leeds. She was just 21 years old. There is much more I personally need to know about the experiences of people who identify as transgendered. As a congregation we have gender neutral washrooms – a small first step – but there will be so much more we need to know about how to be truly welcoming.

I personally want to understand much more about the lives of people living with disabilities. There are an estimated 1 in 5 of us living with disabilities – which may be visible or invisible, public or private. But during the course of our lifetimes won’t most of us come to realise that we are only temporarily abled. Our bodies change and we will have new challenges to face. How then shall we best communicate with one another? How shall we encourage one another to tell our stories? I would suggest that we be curious, respectfully curious. To not so fear making a mistake or getting it wrong that we avoid the subject all together. Let’s give each other chance to say how it is for us. And let’s be prepared to make ourselves vulnerable by asking questions and admitting we don’t know.

Let’s encourage a view of difference as a gift to offer the world. We never have been and never will be perfectly proportioned like Da Vinci’s Vitruvian Man. Our spiritual imperative is to honour the worth and dignity of everyone, to challenge our own assumptions and stereotypes, to be as Margaret Wheatley said in the reading we heard earlier on ‘willing to be disturbed’ by difference.

← A Life of Gratitude
The Mystics’ Path →